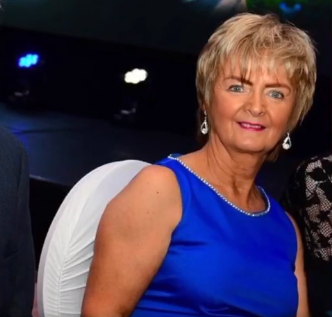 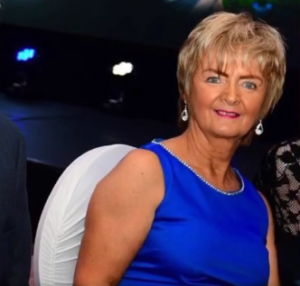 Over the past few difficult months Piarsaigh an Ghallbhaile have bade a sad farewell to a number of club members whose deaths, whilst untimely, had not been unexpected.  Nothing however could have prepared us for the shocking news that broke shortly after 9am on Tuesday 7th of July when we learned of the sudden passing of Rose Murphy, one of our most loyal supporters and very active club member.  Rose was a real bundle of energy when she got going and the old saying that “she wouldn’t see you in her road when something needed doing” was most applicable.
One of the answers to the recent weekly quiz featured photographs from the Tír Eoghain County Convention that the club hosted in January 1996 which showed the banquet setting laid out for our guests.  At the conclusion of the Convention the only complaint from officials was that we had set such a high standard that others would be reluctant to try and emulate us. Rose Murphy was central to setting that high standard, helping us take our place at the very top table in GAA affairs in our own county.  That was typical of Rose, always setting high standards; in her work from dressmaking to interior design, in her own life from how she dressed to how she looked and in how she enjoyed every moment of life from her many friends to her love of country music.
Her greatest love however was for her beloved club and thankfully that has been captured forever so eloquently in her own words on camera when she was so proud to have been part of the re-launch of Club an Phiarsaigh.  In that interview Rose regretted that there was no ladies football when she was growing up.  No doubt she would have brought all her energy and determination to the game as her brothers did with such distinction.  In conversation with her heartbroken family all agreed that what really set Rose apart was not just that she was such a committed Gael but that she had such a depth and real knowledge of the game.  Often in heated discussions in crowded venues after a game Rose was more than able to hold her own and could point out a crucial move that really changed a game or a switch that should have been made.  Invariably, she was always right.
One of the last two books that Rose was reading still lies on the bed from where she passed so suddenly and peacefully away from us, “The White Heat” an autobiography by the Ciarraí legend Tomás Ó’Sé.  All of us who knew and loved Rose have little doubt that she will be more than able to hold her own at the eternal top table of all with his uncle Páidí and all the many other Gaelic legends who have gone before her.  Rest in Peace our dear friend Rose.  May all the Saints of Ireland bring comfort and healing to the Murphy and Quinn families.  Páirc an Phiarsaigh will be a much lonelier place without you but all of us associated in whatever way with the club will always carry such fond memories of you with us in our hearts.
Mary Queen of the Gael pray for her